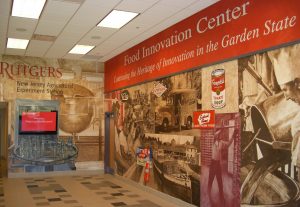 The Client: The Food Innovation Center is a unique business incubation and economic development accelerator program, which is part of the New Jersey Agricultural Experiment Station (NJAES) at Rutgers, The State University of New Jersey. The Center provides business and technology expertise to startup and established food and value-added agriculture businesses in New Jersey and the surrounding region, and they utilize their outreach capacity to reach the food industry throughout the world.

The Project: With a restricted budget, the FIC wanted to promote their core services and their Farm-to-School program which is a statewide nonprofit that works with schools, students, parents, state agencies, other nonprofits, farmers, produce distributors and communities to change the food system choices in New Jersey schools through school garden education promotion and local purchasing. The first shoot was scheduled for early September and a deadline of October 29th, 2014 was set for a key presentation to celebrate their agricultural sector award at the Annual Bridgeton Area Chamber of Commerce Salute to Business and Industry Awards ceremony.

The Approach: The SMS Media Center understood that much of the footage would be collected from the center’s location in Bridgeton, NJ, as well as cooperating farms and processing plants within the region. However, due to a decision to break the project into two distinct videos, it was important to capture images at all locations that could serve both. The script would follow once all shoots were completed in order to best match what would be shown, and specific interviews would be used as both on-camera content and resources for the outline. From a production standpoint, single camera shoots were selected for all locations due to the ease and speed of single setups. Since the majority of footage would be captured in live process of the selected activities covered, careful attention would be required to stay invisible and get the shots “first time”. Natural light was to be the main source of illumination at all locations, with soft boxes used mainly for lighting interview subjects. All footage would be shot in HDV with lavalier mics for audio recording.

The Result: Through the careful coordination of several shoots lasting only a few hours each, enough footage was collected to write the script for both videos and begin editing. The efficiency of the shoot schedule left room in the budget for several stock footage clips that added dramatic production value and both videos were completed on time and extremely well received.