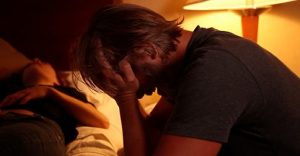 Shot in live public settings at various horror and special interest conventions at the Crowne Plaza Hotel in Cherry Hill, NJ, as well as popular Cape May Point, NJ tourist attraction Sunset Beach, the series (previously edited into a feature film titled HorrorCon) tells the story of a young memorabilia vendor who meets a celebrity author at a horror convention. Both are suffering the lingering effects of tragic loss, and come together to heal in an eerie, supernatural pact of sorts.

Norton, who wrote and directed the project, has been using a little well-earned marketing nous to find the right audience. “The story itself is very unique…aimed at genre audiences but delivering something new at every turn, so we fall somewhere between a lot of the festivals out there, which makes reaching an audience tricky. But the story of how it was made is also unique in that we used public settings to give it a big budget look. It required a lot of reassuring emails to gain the trust of the hotel and everyone involved, as well as a lot of guts from the cast and crew. Our hope is that information regarding the process garners some additional attention from various media outlets who will then spread the word about the series, our company, and what we’re doing here at SMS studios. We want to grow into the indie entertainment market, and the huge amount of experience gained by such an ambitious venture has given us the critical tools needed to address many different projects across multiple mediums.”

The series has reached the 11th of a traditional 13 episodes, with the finale airing on Halloween. “We hope it’s a nice bit of synergy,” says Norton. “The series has plenty of spooky elements, and also some bizarre yet believable twists. It’s more of a mystery wrapped inside a story of two people trying to reconcile their tragic pasts in this chilling and provocative world. At the same time, we wanted to place the horror of fantasy next to that of real-life to see how they compared in terms of audience expectation. We wanted horror and thriller fans to question their obsessions but in an entertaining and thought-provoking way. We’re hoping we pulled it off.”

If all goes well and a large enough audience wants to see more, Norton says he’ll look into a second season. “The series ends with a new start for some of our characters, but one that comes with a lot of potentially horrific complications. In many ways, we’re just getting started, and there’s so much more to tell on both sides of the camera. We’ll sit down when the release is finished and go over our numbers and coverage. So far we’ve got a couple of great articles and the channel has been pretty busy. Ideally, we’ll get to continue the story and learn more about the process of digital entertainment production and Internet marketing. That way we can not only keep going and try new things, but also share our story with others and help them achieve similar or better results.”

To watch and/or learn more about the project, refer to the links below.