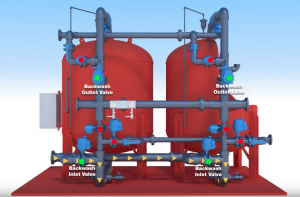 Hungerford & Terry, Inc. is a company that specializes in custom-built water treatment systems. These advanced water treatment systems remove iron, manganese, arsenic, radium, hydrogen sulfide, nitrate, sodium and color for municipal, government and industrial facilities worldwide. H&T has been a longtime client of Scientific Marketing Services, and presented a challenge in hopes that we could aid in the solution.

A long-anticipated environmental trade show in Philadelphia, PA was quickly approaching for H&T, and as leaders in the water filtration market they wanted to display one of their systems in a way that properly showcased its capabilities and magnitude of service. Initially, the company was heading in the direction of 3D printing a model of the system, but quickly vetoed the idea when the reality of the cost to print it set in. This is when they expressed to SMS their end goal: showcase the flow of their Plug and Play Greensand Plus Filtration System and demonstrate its inner processes. Having been faced with similar products in the past that hide their operations behind protective encasements, we knew the only way to deliver what they asked was through 3D animation.

SMS animator, Gina Shearer, studied a model of the Plug and Play Greensand Plus Filtration System and began designing a 3D animated model that went through a detailed run of how the water is filtered, rinsed and backwashed, the direction of flow, and the way that multiple systems can be “plugged” into each other to work simultaneously. A graphic animation has multiple steps to undergo before it’s ready to view, so once the framework of the system has been drawn and programmed to move, it then has to go through a detailed rendering process.

An animation is essentially an assembly of shapes, textures and effects that are rendered frame by frame to tell a story. Shearer commented that, due to the complexity of H&T’s system, the biggest challenge would be the amount of time and computer power needed to complete the rendering process in the tight time frame. Going at an average of 30 frames per second, she had 9 computers simultaneously rendering separate chunks of the animation over a period of 8 days, often running through the night. Unattended rendering risks technological glitches and/or power failures and work being lost, so each render had to be carefully and meticulously planned. Luckily, no such issues arose due to her and her team’s constant vigilance of checking the connectivity and progress of each computer.

A week and change to complete a six-minute animation is a hefty stretch. But properly capturing the essence of an H&T filtration system means no detail could go unnoticed. This required more control over shadows as the animation adjusted to the same light sources that would impact a physical model, therefore creating a more realistic look. Elements such as glossy finishes or the texture of filtrated material take extra time to render as well, but the carefully calculated risk was a small trade-off for a more impressive aesthetic.

In the end, Hungerford & Terry, Inc. had their hand-delivered animation finished and ready to present at their trade show on the promised date and time. Have a look below:

For more info on how you can affordably produce your company’s animated video presentation through our experienced SMS staff, send an email to [email protected] and/or reply in the comments below.